Dubai is undoubtedly a land of riches. There are numerous centers for shopping and fun. To make things better, there are even places you can have both fun and shopping. The Dubai Festival City Mall, or the DFC as an acronym, is one such destination. There you have everything from retail stores to dining opportunities and fun activities.

Another thing that makes it attractive is that it situates along the quintessential creek. The same creek where Dubai began as a small fishing hamlet a couple of centuries ago. Dubai Festival City is on the opposite side of the Dubai creek park and right next to the Dubai Creek Yacht and Golf Club. The other end of the mall borders with the massive development project called the Dubai creek harbor, which is underway.

In the whole old Dubai area, this can easily qualify as the biggest attraction in the vicinity.

Things to do in Dubai Festival City

The Festival City mall is a prime destination for anyone who lives in or near the old part of Dubai. This place is an option to spent time even if you are not for a shopping visit.

The laser show was first featured in the Festival City in 2017. It was recognized as the world’s largest permanently installed projection mapping system at the time. But in 2018, that title was taken away theMART in Chicago. Even then, this show is worth watching every time you go there. If you haven’t been to the show before, you can even visit the mall just to watch the laser show.

Imagine is an extension of the Festival City mall in a small lake that meets the creek. The show features a dancing fountain accompanied by light and sound effects. It also uses pyro techniques to add more spice to the show. The cost of the IMAGINE is a whopping s1.5 billion dirhams.

The show happens in every one-hour intervals from 7 pm till midnight. But the dancing elements show will start from 12 pm onwards, but this won’t have the laser show. You can see the dancing fountain and other things anyway. And also it’s free for everyone, so why just don’t go there?

The walls of the intercontinental hotel, which is a part of the Dubai Festival City, doubles as the projection screen for the show.

You can watch this show even while you are enjoying your food while sitting in the food court inside the mall. This is a good choice of action if it is summer because it can be quite hot outside, even after the sunset.

Apart from the hotel walls, there are holograms strategically placed in the Festival City lake that functions as screens.

The Festival City mall was developed and operated by the Al Futtaim group starting from the mid-2000s. The thing that sets it apart from numerous other malls in Dubai is its entertainment offerings and outdoor activities.

There is a small area of artificial waterfront in the Festival City mall called the Festival City bay. Another popular attraction of this bay is the Abra ride. This is the only place in old Dubai where you will find air-conditioned Abras.

They let you experience the Abra rides even at the height of the summer. These Abras run between The Festival City mall and Creek metro station. To make things even better, they only cost 2 dirhams, which is really a steal.

The Ferris Wheel is the latest addition to the Festival City only installed in 2017. The wheel, on the south bay of the mall, is 40 meters high. This doesn’t have any height records, but it still worth a ride for the magnificent view of the creek. The wheel has 30 passenger pods.

There are a few times of the day for you to take the ride to get the best experience. A ride at the time of the sunset gives an amazing view of the sun setting over the tall buildings of downtown Dubai. Otherwise, you can time yourself to catch the IMAGINE laser show from the top of the wheel, which is also a great experience. The wheel starts running from 2 o clock in the afternoon.

The ticket rate is 40 AED for adults and 25 AED for children under 12. But if you are a family with two kids, you can purchase the family pass for 100, which allows 2 kids and 2 children on board. If you want to splurge a little more, there are VIP capsules that sells for 300 AED that has glass floor and leather seating for six people. 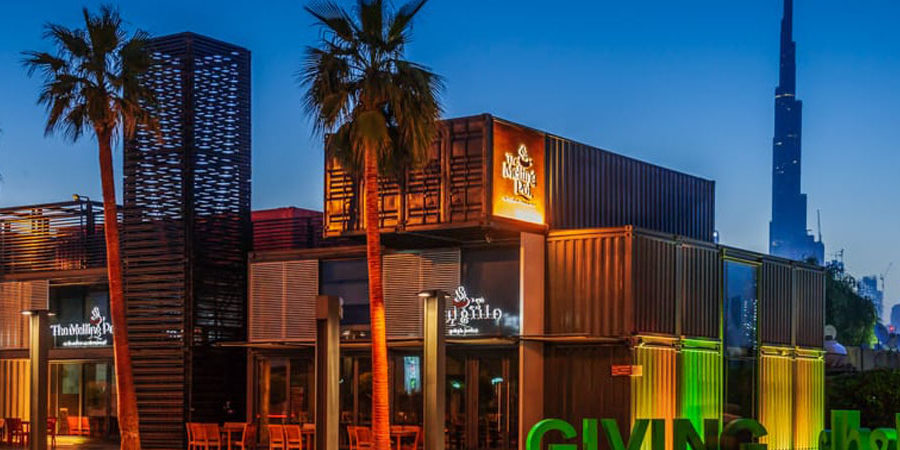